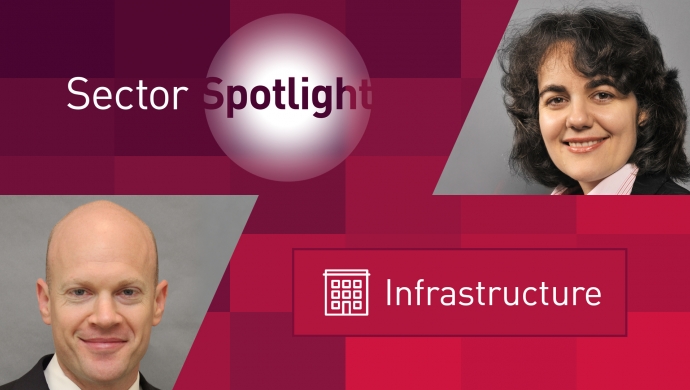 For more details on how MFS can make a difference, visit us at mfs.com/getactive, contact us directly by [email protected]fs.com or please reach out to one of the numbers provided below:

Florence and Scott, they're going to share their views on a segment of the market that's been getting quite a bit of attention recently: infrastructure. Now they recently authored a paper on the American Jobs Plan proposal, which provide fiscal support to US infrastructure projects. But the story is much bigger than that. Florence, if you could start us off and maybe talk a little bit about the long-term need for increased infrastructure investment globally.

Sure. Actually, infrastructure investment needs globally are going to be really enormous and it's driven by two things really. So if you look at developed markets, infrastructure really hasn't been upgraded in many, many years and there's a huge need to replace motorways, railroads, ports, finance the green transition and improve resilience of grid and electrification, and therefore developed markets need to invest a lot in that space. And in the emerging world, because of the urbanization of the population, there's also a tremendous need to build the right infrastructure to support that movement of population. And Oxford Economics has put some numbers around the need globally and it's actually over 10 trillion, of which about half of that is going to be in the United States.

So about half of that in the United States. Scott, can you share some of your views and dynamics that you're seeing with infrastructure investment within the US?

Sure, John. As Florence mentioned, the scale of the investment truly is enormous. It's estimated that in the US alone is potentially the biggest infrastructure spend since the creation of the interstate highway system. And really in the US it's targeted at many areas. It's estimated that 10 million homes and 400,000 schools in the US are still served by lead drinking water pipes. Target important upgrades to the power grid and to transmission that would enable cleaner generation system with fewer carbon emissions to improve the environment over the long term. And another important area of the spend is really focusing on narrowing or eliminating the digital divide by improving telecommunications access for underserved areas. So, we think that the opportunity set is large, and we're excited about the opportunity to invest in companies supporting these efforts.

Yeah, and we're certainly in an interesting economic environment right now. Florence, I want to turn back to you, and perhaps you could talk a little bit about the current economic environment and how it might be actually supportive of fiscal stimulus targeted towards the infrastructure.

Yes, absolutely. The pandemic has taken a tremendous toll on the economy globally. And if we start maybe with Europe,  there's a few programs in Europe which are focused on infrastructure. One is the Green Deal for one trillion, but that was announced prepandemic in 2019, which is aimed at investing in economically friendly areas. And more recently, the COVID Recovery Plan, which is another 750 billion, that is a joint borrowing program in the European Union, and the guideline for governments to spend this is to allocate that money to green initiatives. So things like upgrading building, currently the building upgrade rate is only 1% per annum, but in order to decrease greenhouse emission, that needs to double or triple. We've seen also China launch into a Green Deal as well. Obviously they suffered a lot from the pandemic, but they're also very challenged by climate change and so they have an ambition to reach net zero by 2060, which would mean that there will be tremendous level of investments, particularly on the renewable energy side over the next few years.

And Scott, maybe on Florence's comments, can you talk a little bit more specifically about the US and the current economic environment and some of the fiscal proposals that have been put out there?

A group of senators and President Biden recently agreed on a $1.2 trillion spend package and are really targeting the key investment areas we've talked about. And largely, I think we agreed these do solve many of the problems or help solve many of the problems of the 21st century. First and foremost, they create good jobs to help support the continuing recovery out of the COVID pandemic, as well as reinvesting back into areas that are just outdated. The other opportunities that are there are also is to perhaps invite new investment into areas where we don't know a lot. So green hydrogen is one area where we're excited about the opportunity that it could play in solving long-term, long-haul transportation issues.

And so implicitly there's a pretty strong protection on those assets. If the broader macro environment is changing, where investors still actually get a strong, real return. And a lot of infrastructure we look at also has a lighter touch regulation, but in those areas we're really looking for strong pricing power. Many of the assets we invest in, including towers globally, have really strong pricing power and direct contractual provisions where remuneration is enhanced in higher interest rates or higher inflationary environments. So given this strong protection embedded in both regulated assets and/or the pricing power that the essential services provided by the other types of assets provide, really, infrastructure as a whole is well suited to perform strongly in higher rates and inflation.

And Florence, can you talk a little bit about that dynamic between listed and private? And can they be used in conjunction with one another as compliments?

Many clients invest on the private infrastructure side and that's been the traditional vehicles so far to invest in the space. The funds that are proposed on the private side tend to be quite levered in order to provide a high return over the cycle. And what we've seen recently in the private space is a scarcity of significant assets to buy for private players, which has led to fairly high valuations being paid. On the listed side, obviously the downside is quite obvious there, which is that it's a listed vehicle; therefore, it's more volatile. But at the same time, the structure of the companies is very different. So these are not just established assets, it's a mix of projects. Some are greenfield, some are brownfield, and therefore the company's invested in that space can take advantage of the growth that we talked about previously. In addition, obviously it's liquid, so investors can sell and buy the funds as needed. And then the cost tends to be much lower because we are not directly managing single projects. We are investing in companies that do that for us.

So Florence, it really sounds like there could be room for many investors for exposure to both.

Yes, I think the two can co-exist, depending on investor's time horizon. It's just a different model with some different trade-offs.

Scott, maybe I can ask you. What are you seeing as some of the current opportunities?

Listing infrastructure is actually warranted at relatively cheaper valuations versus the broader market has been in quite some time given accelerating fundamentals and a compelling wealth evaluation. It's well-poised to do well. We're really focused on long-term total return, not just harvesting income, but really thinking about where companies have opportunities to invest at compelling returns. And again, we're focused on inflation linkage and protection, real assets, things that we couldn't live our lives daily without. Climate change is a huge issue for the 21st century. Utilities globally, typically are listed publicly. We're able to use the global investment platform to really compare different regulatory environments, different opportunities for capital deployment. To really pinpoint where we think the best opportunities are as we need more electricity and it has to be filled with something. So there's opportunities to really invest into renewables at scale.

We have long been fans of industrial gas companies where these are well-suited to potentially sorting out green hydrogen. We're focused on a few areas of the market that are cyclically depressed with COVID pandemic-type issues. We've invested in airports, focusing on strong balance sheets where we think they have the opportunity to weather the storm. So again, really combing through the particularities of the way companies are compensated and the embedded protections they experience. We think we're able to provide a really compelling opportunity set for our investors.

And Florence, maybe any follow-up comments from you around current opportunities that you're seeing, perhaps outside the US?

I think actually the opportunities are quite similar whether in or outside the US because the problem is the same, particularly around electrification. Many European utilities, for example, have put out very high investment plans in order to finance the green transition. Another area where we've been quite positive is telecom towers. We think the opportunity outside the US is potentially even greater, typically in Europe where only 30% of telecom infrastructure has been outsourced. That compares to about 90% in the US. And so we think that European tower companies have a big opportunity to consolidate telecom-owned assets. So buy portfolio of towers from operators and consolidate them within their network, which is very positive because it yields substantial synergy. And also with 5G coming in, not only do the operators need to rationalize that tower infrastructure, but they also need to invest more to densify the network.

That's great. Florence, Scott, this has been an absolutely fascinating conversation, and I just want to thank you both for your insights and perspectives on infrastructure. Now, if viewers would like a copy of the recent paper on infrastructure that I mentioned previously, please visit mfs.com or connect with your MFS relationship manager. I'd like to thank you everyone for joining us here today. Thank you.