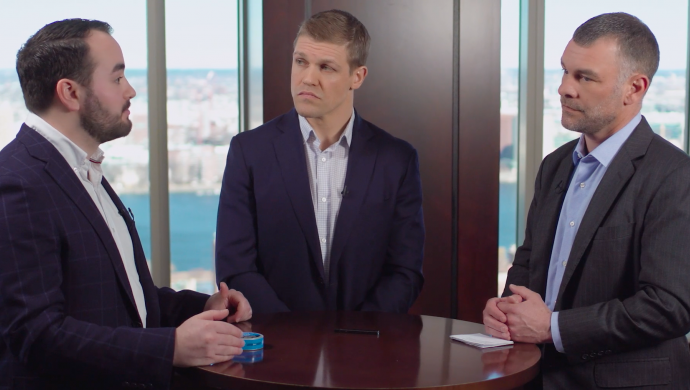 WATCH LATER
Declining cigarette consumption has created risks and opportunities in one segment of the high-yield municipal bond market.

Back in 1998, tobacco manufacturers settled a lawsuit with the majority of states and territories and created a master settlement agreement, or an MSA. This mandated the companies make annual payments to the local governments in perpetuity. Many of the states chose to securitize these payments by taking large, up-front bond issuance proceeds and in return pledging future MSA payments to pay interest payments and principal back to the bondholders. With me today to talk about the changing landscape of tobacco bonds, we have two members of our municipal analysts team, Matt Whoriskey,and Dan Streppa. Matt, since the first bonds were securitized, what's changed in the world of tobacco bonds?

Sure, I think the biggest change has been cigarette consumption declines are significantly higher than they were when the bonds were issued. And there are a few reasons for that, you know, one is we have a much more health conscious consumer, two, are seeing more regulatory changes like higher taxes and outdoor smoking bans, three we've seen a notable shift towards non-combustible products as a safer alternative to traditional cigarettes, so, you know, a combination of these factors has led to consumptive declines that are significantly higher than what we've seen in the past, around four to five percent versus the historical run rate of around 3% in the U.S.

So you have consumption rates that are declining, but why is that important? Why does that affect tobacco bonds?

Sure, Brad, so many of these bonds were structured with the assumption that excess revenues could be used to repay portions of the net early. But because of the rate of decline that we've been seeing many of those prepayments were never made and that becomes an issue when bonds reach their final maturity. So as it stands today, we're in a situation where we could see certain structures default within the next five years.

Matt, innovation is obviously changing our world, I see things like virtual currencies, ecommerce changing many industries, but in tobacco, what new methods of nicotine delivery are available today?

Yeah, sure, so over the last five years or so we've seen several non-combustible products launched here in the U.S. as well as overseas that have rivaled the traditional cigarette. Take JUUL for example, so it's sleek, odorless, comes in a variety of different flavors, it has a nicotine equivalent of one package of cigarettes. Since its launch in the U.S. in 2015 it's grown rapidly and now has a dominant market share within the e-vaper category. Having said that, while the growth rate of JUUL's been pretty impressive, e-cigarettes only represent about 5% of the U.S. tobacco market so it's still early days here. Conversely, looking overseas to say, Japan, where non-combustibles represent about 25% of the market, consumption declines have been far greater. So let's take IQOS for example.

So IQOS is essentially a device that heats tobacco without burning it. Since its launch in Japan in 2014, consumption declines have accelerated to levels three times higher than what we've seen in the U.S.

So this could be a harbinger for things to come if consumption or if adoption rates increase could lead to lower consumption rates for traditional cigarettes.

And Matt, I think it's important for us to point out that this isn't just a Japanese phenomenon, right, we've seen similar transitions play out in countries all over the world. Take Sweden for example, which has one of the lowest prevalence rates of cigarette smoking in the developed world. In large part because the nicotine using population there has transitioned to Snus, which is a powdered tobacco product that users place under their lip. I think the unifying theme here is that many smokers want to quit but simply aren't able to, and in places where we've seen a society recognize a potentially less harmful alternative we've also seen very rapid declines in cigarette smoking.

So kind of a combination of changing consumer preferences and desire to get off cigarettes. Dan, what are the factors that you're analyzing when you're looking at tobacco bonds?

Sure, so as Matt mentioned earlier, the government has historically implemented policies aimed at reducing the prevalence of cigarette smoking in the United States and I think we should expect them to continue to do so in the future. So all levels of government will continue to raise taxes, and we've recently seen some momentum at the state and local levels to increase the minimum age to purchase cigarette products. I think the FDA is also an important factor, this current Administration has taken a particularly harsh stance on cigarettes with their recent proposal to ban menthol in cigarettes and they've also discussed implementing a nicotine product standard that would cap the level of nicotine that's allowed to be in cigarettes at non-addictive levels.

Right and while FDA regulations are you know, certainly a concern, you know these policies are gonna take time to implement and will likely be challenged by the tobacco companies so we view these as more a longer term risk that we're gonna be monitoring. One of the benefits of working at a mutual fund company like MFS is our ability to collaborate with our equity and fixed income counterparts to better navigate these complex regulatory issues as well as bring in our in-house legal team to help us further if needed, which we view as a competitive advantage.

When you're looking at various tobacco bonds in the market, what are you looking at to assess the relative value of one versus another?

Sure, so one really important thing that we look at to differentiate between structures is how resilient different bonds are to declines in cigarette consumption. So we run various scenarios with our models and see how the bonds perform. We take this information, we look at how bonds are being valued by the market, and we find ways to position our clients' portfolios in a manner that best compensates them for these risks.

So in the end, the consumption decline rate is going to affect the relative value of those bonds.

I want to thank you both for joining me, this has been a very interesting talk today.

Thanks, Brad. The landscape for municipal tobacco bonds is changing and the distribution of potential outcomes is growing. As active managers we strive to capitalize on potential opportunities created by this growing uncertainty. Thank you for watching.

The views expressed are those of the speakers and are subject to change at any time. These views are for informational purposes only and should not be relied upon as a recommendation to purchase any security or as a solicitation or investment advice from the Advisor.

Please note that in Europe and Asia Pacific, this document is intended for distribution to investment professionals and institutional clients only.

U.K.- MFS International (U.K.) Limited ("MIL UK"), a private limited company registered in England and Wales with the company number 03062718, and authorized and regulated in the conduct of investment business by the U.K. Financial Conduct Authority. MIL UK, One Carter Lane, London, EC4V 5ER UK provides products and investment services to institutional investors. This material shall not be circulated or distributed to any person other than to professional investors (as permitted by local regulations) and should not be relied upon or distributed to persons where such reliance or distribution would be contrary to local regulation; Singapore- MFS International Singapore Pte. Ltd. (CRN 201228809M);Australia/New Zealand- MFS International Australia Pty Ltd (" MFS Australia") holds an Australian financial services licence number 485343. MFS Australia is regulated by the Australian Securities and Investments Commission.; Hong Kong- MFS International (Hong Kong) Limited ("MIL HK"), a private limited company licensed and regulated by the Hong Kong Securities and Futures Commission (the "SFC"). MIL HK is approved to engage in dealing in securities and asset management regulated activities and may provide certain investment services to "professional investors" as defined in the Securities and Futures Ordinance ("SFO"). Japan- MFS Investment Management K.K., is registered as a Financial Instruments Business Operator, Kanto Local Finance Bureau (FIBO) No.312, a member of the Investment Trust Association, Japan and the Japan Investment Advisers Association. As fees to be borne by investors vary depending upon circumstances such as products, services, investment period and market conditions, the total amount nor the calculation methods cannot be disclosed in advance. All investments involve risks, including market fluctuation and investors may lose the principal amount invested. Investors should obtain and read the prospectus and/or document set forth in Article 37-3 of Financial Instruments and Exchange Act carefully before making the investments.