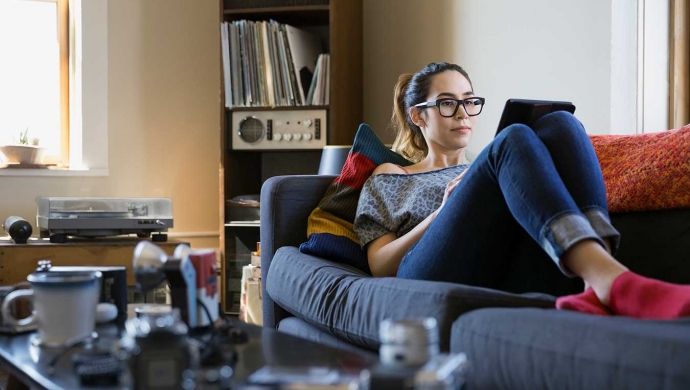 WATCH LATER
The diverse video market allows for healthy competition among today’s media giants, according to investment analyst Brad Barrett. But can anybody stop Netflix?

Matt Miller: When you're thinking about long-term holdings on behalf of our clients, are you trying to think 10 years from now, who really prevails in this competition? Is it the Facebooks, the Googles, the Amazons, etc., or is it the Disneys and the Time Warners or the more traditional providers? Or is there room for everybody to flourish over the next decade?

Brad Barrett: All of the companies have their own mix of businesses, and their own sort of idiosyncratic features. And in the video market or the entertainment market, it will not be a winner-take-all market in the same way that, say, search or social media has been winner take all. I think it's very likely to be much, much more concentrated than it used to be, but there'll certainly be room for multiple players.

And the reason is that video services are not good substitutes for one another, in the sense that if you ask an HBO subscriber, for instance, "Why do you subscribe to HBO at $15 a month when you could get Starz for only $7 a month?" They would sort of look at you blankly, like “I don't understand the question.” Starz and HBO are not substitutes, right? They're both video services; they're both commercial-free, high-end programming. But people subscribe to HBO because of “Game of Thrones” or whatever show they like, right?

Brad Barrett: And there isn't actually a great substitute. If you want to watch “Game of Thrones,” there is no substitute. So you have that natural fragmentation because the products aren't really substitutes for one another. So Disney can win and Netflix can win and Google can win — and that is a market structure that's likely.

When I think about what the world looks like in 10 years, though, I do try to have a framework for what is the structural dynamic at play, and will that continue? I think we will certainly see a continued shift from linear to streaming. Streaming services are cheaper and better for a variety of reasons. And then there's this particular dynamic within the streaming market where I think it's very likely to be much more concentrated than the old linear market. It's likely that the leaders maintain or expand their lead, and it ends up being a global business in a way that the linear business never was.

Matt Miller: Let’s talk about Netflix a little more in depth. They seem to be emerging as a leader in this whole streaming field. How do you think about their growth prospects when their penetration is already pretty high, at least in the U.S.?

Brad Barrett: You have several positive feedback loops going on with Netflix that are allowing for incredible momentum. The first, most basic is as you get bigger, you have more money to spend on content — and the value of the service is largely dependent on how much a company spends on content. I don't think any company has a unique ability to, say, just produce better shows than any other company. But you know, Netflix is growing their revenue, say last year, roughly $3 billion, and returning most of that into content. So to give you an idea, they're going to spend about $3.5 billion more in cash producing content this year and licensing than they did last year. HBO's entire budget is $2 billion.

Brad Barrett: So you have a service that is a little bit more expensive but is getting like an HBO-and-a-half better in the course of a year. That is a powerful dynamic, right? Because then, let's say they get another 25 million subscribers. You have then another $4 billion, of which some portion goes . . .

You have another dynamic, which is the more people use the service, the more likely it is Netflix can have a successful hit show in the future, because they can essentially distribute their new shows on the back of their current usage. This is why football and the Super Bowl are so valuable to broadcast networks: because they launch shows off the back of them. Getting people already watching your network is incredibly important to have them continue to watch your network.

And then you also have, probably, an underappreciated dynamic where shows are deeply social. People want to watch what other people are watching because they love to talk about it; they love to have shared experience. And then you have a knock-on effect of people talking about these shows on social media and in the press. So you have this sort of benefit, when you're very large, of being the one who has the most shows breaking through. And that then allows you to acquire subscribers at a cheaper rate than anyone else could.

So those are powerful dynamics that, looks like right now, maybe with the exception of Asia where they just recently entered, is working all over the world.


Investments are not FDIC-insured, nor are they deposits of or guaranteed by a bank or any other entity, so they may lose value.

Any reference to a company, product or service does not constitute endorsement or recommendation for purchase and should not be considered investment advice.