Growth Stocks: Going Our Own Way 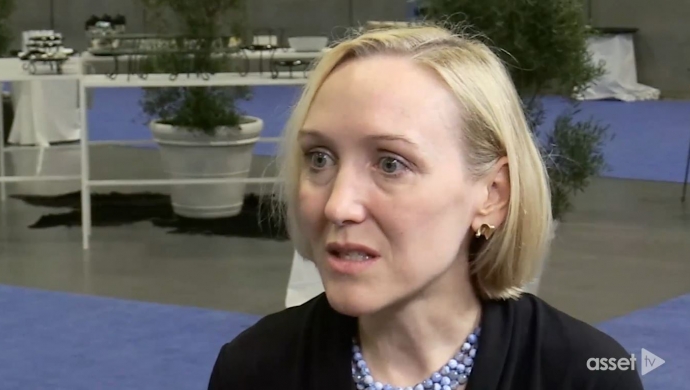 WATCH LATER
ClearBridge Investments’ Margaret Vitrano on the state of US large caps now and why it’s important to go beyond a “groupthink” view of growth.

https://www.clearbridge.com/contact-us.html
Gillian: Welcome to Asset TV. I am Gillian Kemmerer here at the Schwab Impact Conference in San Diego, I’m joined by Margaret Vitrano; she’s a Managing Director and Portfolio Manager for ClearBridge Investments. Margaret, thanks for joining us.

Margaret Vitrano: Sure. Thanks for having me.

Gillian: Absolutely. So we’ve an interesting year, macro wise and I’m curious to know, what are the macro issues that you feel are going to have the biggest impact on stocks coming up?

Gillian: And are there any areas that you feel investors might be underestimating the potential for things to go better than expected?

Margaret Vitrano: Well, there’s a lot of skepticism and pessimism within healthcare, and specifically within biotech right now. And if you go back and look at kind of how we got where we are now, I think there are a couple of reasons. There have been some drugs over the last couple of years that have been aggressive in pricing and that’s drawn a lot of media attention. Clearly, Hilary Clinton has made drug pricing and drug pricing reform a key part of her platform. However, when we just take a step back and take a long term view, which is how we think about investing, we still think that there are companies within the biotechnology space where you’re buying them simply based on the currently marketable products. And so you’re paying very little for the pipeline. Now, not all the pipelines are going to work, so there will be failures within clinical developments. But even if a little of it works, there’s really upside potential in those stocks. So you know, we think that the bark is worse than the bite right now in terms of some of the skepticism about these companies ability to generate returns over time.

Gillian: Do you think the M&A fury will continue in biotech?

Margaret Vitrano: You know, I think whenever you have low interest rates and a lack of revenue growth, yes, I think it will continue. You know, one of the things that surprises a little bit about the M&A environment is the regulatory oversight, and Washington’s skepticism about consolidation. But I think from a companies’ perspective, it makes sense for that consolidation to continue.

Gillian: Now what about the low growth environment that we’re in, it seems like it’s going to be persistent and we may have it for a few years to come. As an equity manager how do you deal with that?

Margaret Vitrano: Yeah. It’s interesting because if you think about the dearth of growth that we have, in some ways that actually explains why some of the high flying internet companies that performed well last year have continued to perform well this year. Because there are not a lot of places to go if you’re looking for growth, and I think that explains why those companies are continuing to do well. When we think about growth, sometimes we think about different kinds of growth, energy is a good example. A lot of growth managers might say, “Why on earth are you investing in energy as a growth manager?” But as in a cyclical recovery, we think the energy companies have a lot of earnings growth ahead, and frankly it’s an area that has been … has had a little less focus recently, so you can find value there.

Gillian: And in terms of the active versus passive debate, when you’re looking at the financial media, I feel like it seems to be the story that’s playing out over and over and over again. What do you say to those who are skeptical of active management in general?

Margaret Vitrano: Well, look, I absolutely understand the interest in saving money, you know, we like to think that we are valuation sensitive investors. So I appreciate wanting to save money. I guess I would just say that passive investing can have some risk as well. And you just need to think through the risks and understand the risks of passive investing. If you think about, again, getting back to energy, energy was actually kicked out of my index last year, which was exactly the time as an active investor, we were buying energy. The same thing with Microsoft, you know, you added Microsoft to the index after it had already appreciated double digits. So in some ways you’re kind of buying the stocks that have already worked and selling all the ones that haven’t worked and there’s risk involved in that.

Gillian: And moving kind of from a look at sectors and indices to let’s say small versus … mid versus large cap, focusing on the latter. Large cap is an area where it’s been difficult to stand out. It’s one of those places where a lot of managers have been caught up, but you’ve managed to do that, so, what’s been your process looking at large caps?

Margaret Vitrano: I think one of the things that we do a little bit differently is have a very broad definition of growth. It’s not just revenue growth that will drive a stock higher. It can be margin expansion. It can be a cyclical recovery. And so we have a really broad range of growth companies. And some of those diamonds in the rough have been really, really nice performers for us this year.

Gillian: Have you been at all worried about crowding in large cap names?

Margaret Vitrano: ] Sure. I mean I think just getting back to that question of why some of those high flying internet stocks that worked so well last year, worked again this year. No question that a lot of growth managers were hiding out in them. What we do is we take a step back and say, “I’m not scared just because other growth managers are invested in a stock, as long as I see growth potential and I still see upside potential in the stock.” What worries me more is when I see a stock that may be fundamentally overvalued or have too much embedded in the stock price and that would make me nervous.

Gillian: Sure. Valuations have been above average and we’ve seen a lot of equity managers kind of approaching this market with skepticism, maybe a “show me” attitude. Do you think it’s justified?

Margaret Vitrano: I think when I think about the market right now, I think there’s a focus on what I call secure return. I’m just going to copy a phrase a strategist from one of the bulge brackets used to me, but I think it really sums it up nicely. I think it’s a focus on whether that secure return is those internet stocks that did well last year and are continuing to do well, or whether that secure return is companies that have high dividend yields. There is a focus on secure return. There is a very low appetite for turnaround stories, which I would say, you know, those are the show me stocks, and I think there’s a low appetite for those right now. And that’s a little bit of the market’s nervousness, given the moves that we’ve had.

Gillian: Sure. And we’ve certainly had them both here and abroad.

Gillian: It’s been an incredible year for macro volatility. In terms of the current round of earnings announcements, what are you thinking right now, what are some of the trends that you’ve seen and what are you keeping your eye on?

Margaret Vitrano: It’s interesting because the current earnings season is actually coming in quite strong, I think 45% of the S&P has reported, and on average 75% of those companies have big expectations on an earnings basis. Even on a revenue basis, the numbers have come in a little bit better. The historical average is lower than that. If you think about callouts, sectors that have done well so far, financials have been a nice callout with upside this quarter, information technology has really been a good quarter as well. In terms of weak spots, industrials continues to be an area where the results are more tepid. Now, one of the things that we have been thinking is if we believe in that cyclical recovery in the energy market, a lot of the industrial names have been hurt by the down cycle within energy. So in theory that secondary bit of trade of the oil markets coming back, helping the industrials should help in 2017.

Gillian: And do you think that the guidance from firms have been on target?

Margaret Vitrano: Generally speaking, I mean I think in general, estimates are always too aggressive at the outset of every year. But I haven’t necessarily seen any difference in the level of aggressiveness this year versus any year.

Gillian: Well, thank you so much for taking the time to share some of your thoughts with us.

Gillian: Thanks so much for joining us. From San Diego, I am Gillian Kemmerer for Asset TV.