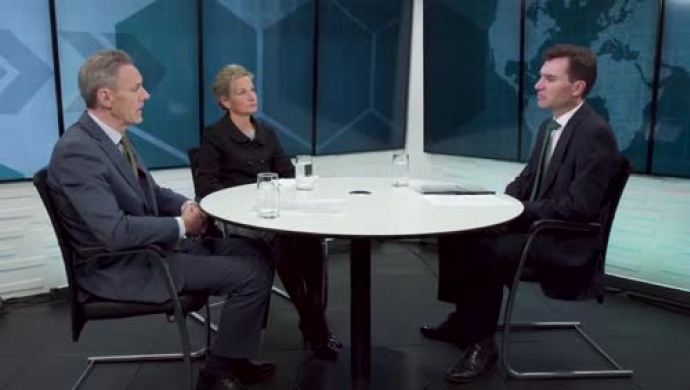 http://www.newtonim.com
PRESENTER: The global economic cycle is looking pretty long in the tooth. It’s been going for at least nine years now. Well to discuss why that is and the implications I’m joined by Iain Stewart and Suzanne Hutchins. They are global portfolio managers, part of Newton’s Real Return Strategy. Well, Iain, risk markets keep on rising, they keep shaking off any negative news, why do you think that is?

IAIN STEWART: Well that’s certainly the case. It’s been remarkable. Well we think there’s a number of reasons. I guess the first is that we can’t overstate the impact of QE. We’ve had the most enormous monetary policy experiment the world’s ever seen, and it was designed expressively to inflate financial asset prices, so that’s what it’s done. During this process investors have become conditioned to expect further policy loosening. Any time there’s any problem in the world we’ve had whatever it takes from Mr Draghi and various puts from Fed chairs. And there’s also been an impact perhaps somewhat paradoxically because it’s been a relatively low growth recovery. There’s been a Goldilocks environment. Growth has never been too hot to investors’ minds worry them about interest rate rises, despite the fact they’re going up a little at the moment. So they feel that the cycle just isn’t going to end.

SUZANNE HUTCHINS: And it’s been our view that continued intervention, state intervention, will inevitably lead to greater volatility, you know, get back into the boom bust cycle. It just hasn’t happened yet.

PRESENTER: Well, given that, what’s different about this economic cycle?

SUZANNE HUTCHINS: Well with this economic cycle the real economy has hardly recovered, and so Goldilocks has been very much kept alive and well.

PRESENTER: And Iain, are you worried that this is really quite a broad-based bubble now?

IAIN STEWART: Yes, it’s different this time. I guess the previous two bubbles were quite narrowly focused: first time on technology, second time in banking and real estate in the US. This time cheap money from the developed world has spread everywhere in the world and seeped into all asset classes. So this is a much more broad-based bubble and we think contributed to what we describe as a sort of financialisation of economies: economies are now much more sensitive to financial markets which are bigger, the levels of markets, the levels of interest rates etc. And I think what’s important about that is that the risks this time in this cycle are very much with the end investor and the saver who perhaps don’t realise that they’re bearing those risks, rather than in the banking system, which was important last time.

PRESENTER: But given that this cycle is continually being extended, isn’t the idea of boom and bust really just not valid anymore?

IAIN STEWART: Well I guess it’s tempting to think that if the authorities can extend the cycle this long, why can’t they just do it indefinitely? But I think that’s also characteristic of these points in the cycle. I don’t know if you remember the Chancellor of the Exchequer in the UK in 2007, Alistair Darling, suggesting that boom and bust had been eradicated, and we know what happened next. So we think that cycles haven’t been abolished. And also this time we’ve got a tremendous amount of debt. That’s increased perhaps by about 40% in the current cycle. It was quite clear in the last cycle that we had a debt problem, and now we’ve got an awful lot more. This time the debt isn’t so much in households or in the financial system, but is more in government.

Government debt is very high all over the world in the development and the developing world, at records in a peacetime environment. Corporate debt has increased hugely; it’s doubled in the MCSI constituents – that’s world index companies. So the flash points are probably China this time, where half of the corporate credit in the world has been going on. Areas like EM US dollar debt where interest rates are rising. And specific areas like auto loans and student loans etc.

PRESENTER: And what impact has all this regulation had that’s come out since 2008?

IAIN STEWART: Yes, we think there’s a combination here of policy incentives on market participants with regulation, banking regulation, and innovations that has created a different structure for markets in this cycle, and one that could make markets much more volatile. And what I mean by that is that investors have been very much incentivised to take risk. They’re now a huge trading community. They trade in all sorts of new ways, high frequency, using machines, etc. Companies have been incentivised to buy back their own stock, which makes them more fragile if the backdrop changes. Banking regulation has reduced the amount of inventory that investment banks hold. So there really isn’t much market making but yet there’s a giant credit environment, lots of credits, securities. And lots of those investors who’ve been pushed into yield if you like, because there’s no interest rate on cash in this hunt for yield globally, have done so through new structures like ETF, whatever, and although they diversify the exposure to risk, they also potentially increase the risk of contagion. Because they effectively make investors believe that the liquidity in the underlying asset is unlimited, when in fact we know it isn’t in most cases high yield debt or EM debt.

PRESENTER: Well, Suzanne, given that we’re in an extended cycle, where exactly are we in it?

SUZANNE HUTCHINS: I think inevitably we are late cycle if you put it in the context of history. And in fact this is the second longest cycle in the US since records began in 1850. And in fact by next summer it’s going to be the longest cycle. And there are lots of indicators that suggest that we are more in late cycle, whether it’s elevated corporate profit margins, very low unemployment. We’ve got a lot of confidence in both the consumer and the corporate business sector, which has been extended. And also you’ve got a flattening of the yield curve as well.

Now, just because there’s earning momentum, it doesn’t actually mean to say that equity markets can’t fall. And in fact if you look at the last 13 bear markets, there have been a number of common threads through all of those. The first being very strong earnings growth, second very elevated valuations and third just no volatility or very little volatility.

PRESENTER: But, Suzanne, even for investors who say fundamentally I like the thesis that you’re discussing here, but this real return strategy hasn’t kept up with the returns from equities, yet over time it’s promising an equity-like return, why should they keep the faith?

SUZANNE HUTCHINS: So if the boom/bust cycle is a correct assumption, then the gains that investors have achieved over the last few years are quite likely to dissipate very quickly if you compare that to history. Now Professor Schiller looking back over the last 100 years, his data suggests that the average bull market has been around about 131%. We’re in a bull market which is well over 300% and the average bear market is around about 38%. So that suggests that the recent gains that people have enjoyed, there could be quite a lot of downside from here.

The second point is that investors have actually been benefiting from 18 to 20% returns, but yet if you look over the long-term history actually real returns from equities have actually closer to 5 or 6%. Now the real return strategy was launched in 2004, so we’ve seen a very long cycle, and generated very decent returns, positive returns, through what has been a bear market as well as a bull market over that time period.

PRESENTER: So how are you investing the real return strategy at the moment to cope with the outlook that you’re predicting?

SUZANNE HUTCHINS: Well we’re emphasising capital preservation. We still think that that really makes sense. But at the same time having the return risk seeking core constrains by both a mix of direct and indirect hedges. And then focusing on the characteristics of what you actually do own is very important.

IAIN STEWART: Well I think it’s really to keep it simple. We’re really trying to focus on what we own, and why we own it. We’re trying to avoid illiquidity, leverage, long trains of counterparty risk, getting involved in complex structures, for example, but really above all preserving our clients’ capital.

PRESENTER: We have to leave it there. Iain Stewart, Suzanne Hutchins, thank you both very much.

PRESENTER: And a full copy of the investment thesis, a perspective on returns, is available on the link below this player.